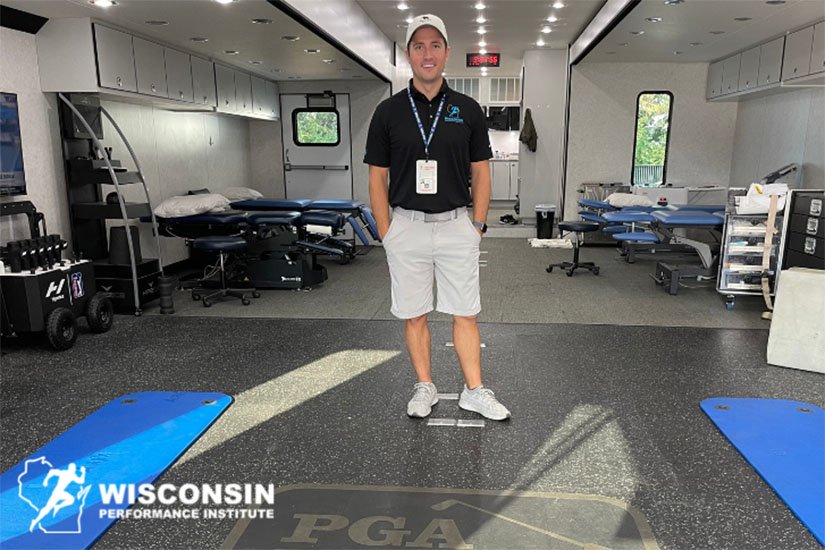 You may have seen how the motion analysis and subsequent movement correction done by the Wisconsin Performance Institute can improve the golf game of an amateur. What can it do for a pro?

Do they look at the gym-like setting and all the sensors and say, “Hey, no thanks – I just grip it and rip it,” or do they embrace the process?

If you’ve spent any time investigating the Wisconsin Performance Institute, you know that Klapper is a golf fanatic who loves using WPI’s Noraxon motion-analysis system to analyze golf swings.

He’s team lead for WPI’s PAR For The Course program, which focuses on performance, analysis, and rehabilitation for golfers looking to improve their game or are recovering after an injury.

In addition to being a skilled physical therapist, Ryan is certified by the Titleist Performance Institute, so he knows a thing or two about golfers and the golf swing.

As part of his time in Sioux Falls, Ryan attended the Champions event as a medical staff member, which gave him time to observe the players before and after their rounds.

In addition, Ryan was able to spend time in the PGA rehab and fitness trailers.

What did Ryan see?

As he was watching the players, whether on the practice tee or in the trailers, he saw several of them going through warmups similar to the ones he has developed for players and uses as part of the WPI programs.

In addition, he saw many players focusing on body control in the same way he coaches golfers at the WPI.

What does that mean for you?

One of Ryan’s key takeaways from this event is that what he’s doing is very similar to what the best in the world are doing — and it’s right here in Stevens Point, accessible to all and affordably priced.

Even better, it works with golfers of all levels, from junior and high school up to professional.

If you’re not satisfied with your golf game and the way your body moves when you play — whether that means pain, injury, stiffness, flexibility, strength, power, or being more consistent with your body mechanics — get your swing analyzed at the WPI. While there, you’ll learn about the kinematic sequence and your body-swing connection, and unlock the power in your game.

In Sioux Falls, Ryan was able to meet some of the best golfers in the world and establish relationships with guys that he grew up watching play the game.

It’s just part of his long-term goal of expanding his knowledge of golf and golf training … and it won’t be the last PGA event where he works as a medical staff member.

If you’re serious about improving your game, contact us today to schedule your visit and get the jump on your off-season training.

Sign up to receive updates and news from WPI.