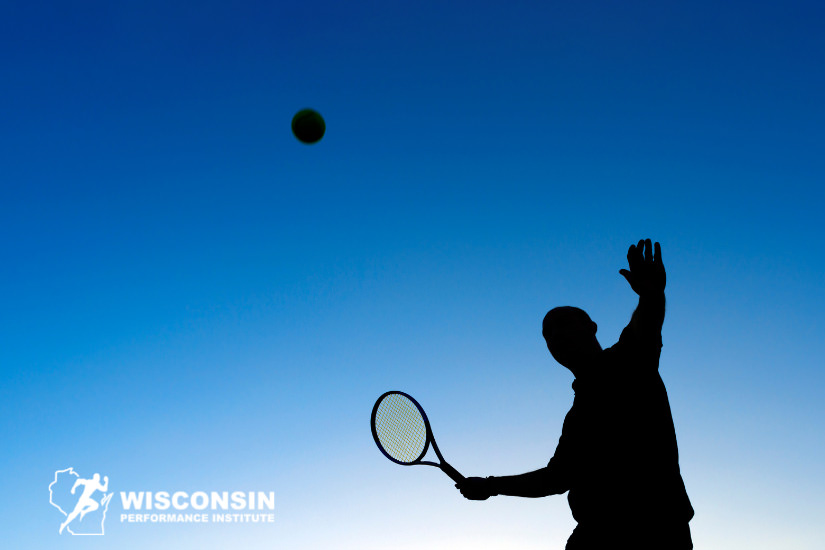 What can the Wisconsin Performance Institute do for you? Based solely on what it did for me…a lot.

Let me explain. I’m a recreational tennis player who loves the game — I mean, really loves the game, to the extent of owning a ball machine and having it throw balls at me in my backyard in December.

I still harbor the occasional fond and foolish notion of trying to be ranked as an over-60 tennis player, so when the WPI team asked if I wanted to be a guinea pig for their tennis motion evaluation, I jumped at the chance to potentially improve my game.

I arrived at the facility in athletic gear, ready to see what a motion evaluation could do for me. Carter Hoffman PT, DPT, CSCS and Sheila Banovetz MS, PT expertly hooked me up with the multiple sensors that deliver movement information to the Noraxon motion-analysis system.

After I stood still for a moment to help calibrate the system, Carter and Sheila told me to pick up a racquet and ball and start swinging.

The sensors don’t restrict movement at all; in fact, the only restrictions on my movement were self-imposed, the result of it being March and me not having picked up a racquet for several months.

My service motion felt clunky and awkward, and I’m sure that if I’d been trying to place my serves inside the service box and not within the parameters of a rather large net I would have been failing miserably.

Even at that I nailed at least one serve on the frame of the net, sending the ball into a low-trajectory orbit.

After several minutes of shooting unguided missiles around the facility Carter told me to stop and watch what he was doing on the laptop that was connected to the sensors…and that’s where the magic began.

The Noraxon system had created an avatar version of me. The serving motion of my avatar had been recorded, and now it was being played back, with the ability to stop and start and go back with the literal push of a button.

In addition to my avatar, I could see my actual movements along with the movement patterns and velocities of different parts of my body.

The analysis was telling me how I was bending and twisting, and how I was accelerating and decelerating my lower half to move my upper half through the ball.

From the side I looked like a baseball pitcher, but with a tennis racquet in my hand. The image was intoxicating; I’d been a pitcher earlier in life without much success, but now I looked like I could throw a 90-mile-an-hour slider at the knees.

I can’t tell you the last time I had been so happy about something tied to my athletic performance.

The system showed that I could get more twist in my torso, and more knee bend and glute activation with my lower half.

Then they had me try it all again, but with my lower half doing more work. And wouldn’t you know—the velocity of my serve improved dramatically.

For someone who had been struggling for years to improve their tennis game without coaching or lessons, that piece of information was priceless. The next day I scuffled out a place in the snow and started hitting serves using my new-and-improved motion. It felt amazing.

With the snow off the courts, I’m now playing matches and can report that while I still have bad days, focusing on my lower half (and watching the ball and getting a good arm swing and so forth) definitely is a tool I can use when my serve starts going awry.

While all that is great, it really only scratches the surface of what that one movement-analysis session has done for me.

I used Carter’s analysis of my trunk rotation to improve my forehand. I now get more rotation, power, and accuracy on that stroke using the principles he was applying to his analysis of my serve.

And that’s not all. I also play a lot of driveway basketball, and his instructions on using my lower half has helped my jumping and shooting, especially my jump shot.

I even use Carter’s advice when I play soccer and mess around with a lacrosse stick, because doesn’t everybody do this stuff?

I can’t say whether other people will get as much out of a session as I did. Everyone differs in their motivation and their ability to geek out over torso twist. But for me, movement analysis was the best thing I’ve ever done for my tennis game – and my athletic performance in general.

There isn’t much more to say other than this: No matter your sport or activity, schedule a movement-analysis session today. It just may transform your game…and your life.